Mini games and Challenges of the Thunder Dragon

Here are the "mini games" you can find throughout your adventure. Have fun between two temples or at least try not to get mad ^^

The words in red must be checked. Thanks!

Location: Eldin Volcano, near a Bokoblin camp. Place a bomb in front of the cracked wall
Available: As soon as you found it
Price: Beginner: 30 rupees; Intermediate: 50 rupees; Expert: 70 rupees
Goal: To dig to find as many rupees as you can while trying to avoid bombs and rupoors (-10 rupees) 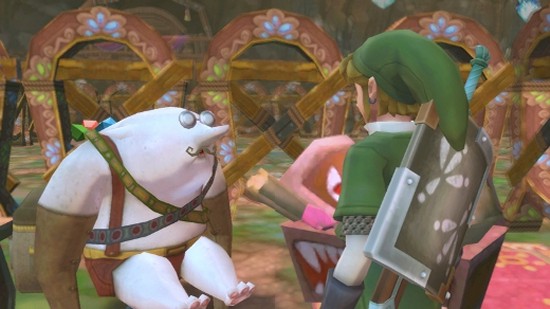 Location: Bamboo Island
Available: As soon as you found it
Price: 10 rupees
Goal: To cut a big bamboo stem as long as you can

Prizes: A rare treasure above 28 pieces
Consolation prizes: An evil crystal or a monster horn between 20 and 27 pieces; 30 rupees between 15 and 19 pieces

Remark: The more your sword is upgraded (thus longer), the easier it is.
Tips: Make little honrizontal strikes and place your sword in order to do left-right strikes quickly and effectively. 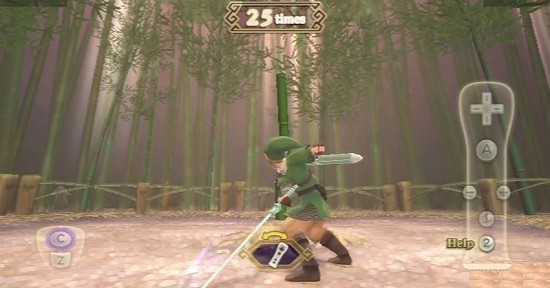 Location: Fun Fun Island
Available: After repairing Scrapper and bringing the lost roulette back
Price: 20 rupees
Goal: To land on a coloured square (ideally the multicoloured square) by going through the 5 circles and avoiding the unlucky balloons during your skydive

Prizes: Piece of Heart and 500 rupees. You must go through all of the circles, avoid the unlucky balloons and land on the multicoloured square
Consolation prizes: They depend on your multiplier (circles gone through) and the square you land on. Pink and blue squares: 50 rupees - Red: 20 rupees - Blue: 10 rupees - Green: 1 rupee (Brown: 0 - Black: -10 rupees)

Remark: Try to visualize and anticipate your path.
Tips: To always fall (almost always) on the bonus square, watch attentively the square location when you go through the last circle and move two squares in counterclockwise (it's an example) while keeping your speed (don't dive, just fall). You have more than 80% chance of landing on the bonus square. 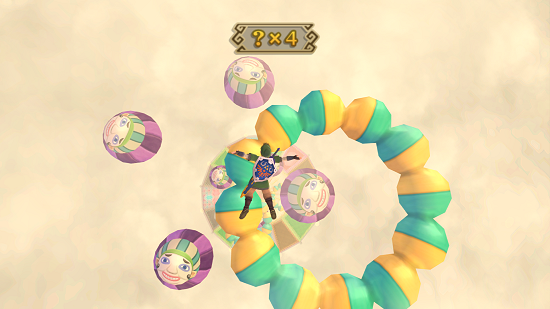 Location: Bug Rock inside the ThunderHead
Available: After talking to Levias
Price: Beginner: 20 rupees - Expert: 50 rupees
Goal: To catch 5 or 10 insects (depending on your level) in less than 2 minutes

Tips: Take some time to learn the route. Start by going to the top of the island and jump inside the building. Go upstairs and continue the path by repeating.

Beginner route: Start by rolling into the wall ahead and grab the Sky Stag Beetle. Go left, jump down and grab the Volcanic Ladybug. Go back up to the other side and go to the end of the path (by taking a bridge). Enter the central room and catch the Starry Firefly. Exit through the narrow path hidden by pots and you arrive on a wooden surface where a Lanayru Ant is hiding. Use the Z button to find it easily. Finally break the pots to your left and grab the Skyloft Mantis.

Expert route: Head right, catch the rope and pick up the Gerudo Dragonfly at the bottom of the slope. Then climb the slope and grab the Eldin Roller (if it's going down, leave it). Go left to avoid the hornets and grab the Lanayru Ant along the way. Throw the last pot before the hornet tree to find the Skyloft Mantis (you might kill the insect if you use your sword). Jump down towards the outer edge and catch the Sand Cicada on the corner of the fence, then jump down just a bit to find a Woodland Rhino Beetle on a wall. Jump down again to catch the Blessed Butterfly and move forward to find the first Faron Grasshopper (you can also catch a Blessed Butterfly at the same spot). Jump on the small plank and further, then once at the end of this "corridor" grab another Eldin Roller. Get in the round room to the right, go straight on, roll to go through the cobweb and throw the small pot on your right to find a second Faron Grasshopper. You did it!

If you missed an insect in the above procedure: there is a third roller just on your left. There is also a rhino beetle on the pillar close to the cobweb (but don't make it fall or it would drown). For other insects follow the narrow path hidden by pots: there is a mantis inside a pot to the left, as well as an ant nearby. A bit further are dragonflies, then by using the Clawshots on the ivy (aiming rather left) you will find a cicada. Finally after getting back up the "corridor" you should find a butterfly, a grasshopper and a roller. 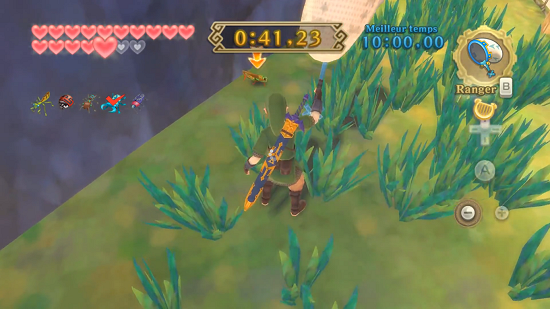 Location: Shipyard
Available: After completing the Sandship
Price: 20 rupees
Goal: To reach the arrival as fast as you can

Tips: Anticipate the bends and learn the route. Only accelerate in the bends. Expert level: jump only over the first hole and take the right path near the end. 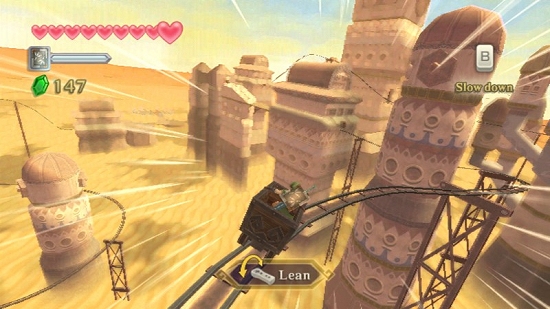 Location: Skyloft, in front of the Sword Training Building
Available: After completing the Sandship and making Fledge stronger
Price: 20 rupees
Goal: To shoot as many pumpkins as you can in 90 seconds

Prizes: A Piece of Heart for reaching 600 points, then a rare treasure after getting it
Consolation prizes: An ordinary treasure above 400 points; 50 rupees between 150 and 399 points 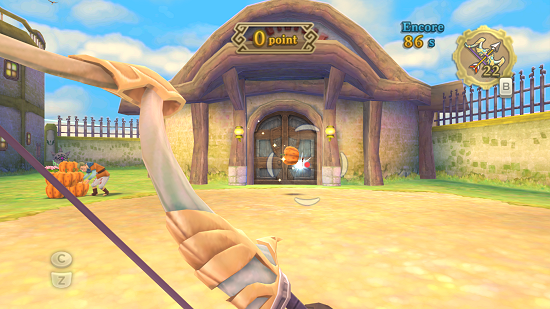 Playing in the Lumpy Pumpkin

Location: Pumpkin Landing, at night
Available: After completing the three missions of the owner
Price: -
Goal: To play the Harp while Kina is singing

Prizes: 50 rupees if your performance was exceptional
Consolation prizes: 20 rupees for a good performance (nothing under)

Remark: The arm movements of the customers are always the same. Thus if you learn them by heart, you'll be able to easily be in sync with them. 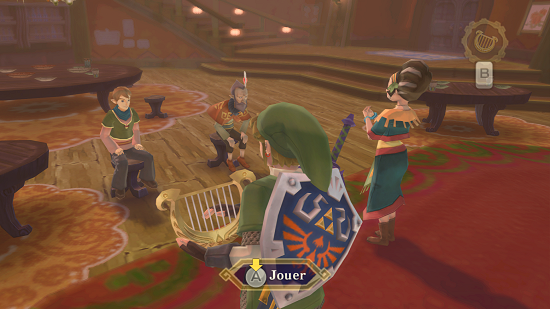 Remark: When finishing the mini game once, Kina won't let you play again. In order to play again, you must go back to Skyloft or land under the clouds.
Tips: Move slightly the stick to the left and walk a bit: you'll see the pumpkins tilting faster when you walk. Thus, move slightly the stick to the right and walk a bit, and repeat this to reach the shelter without having the pumpkins tilt too much. If you bump into a wall, do the same but instead of going forward, move backward and face the shelter. 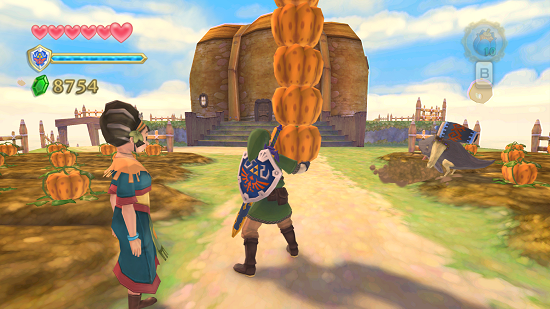 Prizes: A rare treasure if completed in a set time
Consolation prizes: 20 rupees and all the treasures you found during the challenge (ideal for the Evil Crystals)

Location: Lanayru Gorge
Available: After healing the Thunder Dragon
Price: ---
Goal: Defeat the bosses in a row. You can choose the first boss but the next ones will be random.

Tips: Drink a Guardian Potion + just before starting the challenge to be invincible for 3 minutes and choose to fight the toughest boss according to you. There's even better: Have the Potion Medal with you to get 9 minutes of invicibility, allowing you to defeat 3 to 5 bosses without getting hurt. And think of retrieving as many hearts as you can in the rooms where there are some.

Thank you to Darsh, Sanitarium026, Samchi, Christopher, Crepus, Marc and Juju Dredd for their contribution!