What's new in the 3D version

The Shadow Temple and Water Temple are easier

Some graphical details were added or changed to make the progess easier:
In the Water Temple, drawings near the three places where the water level can be changed, now show what the level will be (if changed). Moreover, shining coloured lines now show the way to reach those three places.
In the Shadow Temple, there are two rooms with skulls on the walls. Previously, to show the invisible paths, the eyes of the skulls were slightly flashing, in the 3D version, these skulls are of a different colour (blue).

All the details are on this special page.

Sometimes when Navi moves towards the ground and becomes green, play the Sun's Song: A large yellow fairy will show up and restore all your heart containers and magic meter if you touch it. More information here.

To get the second Deku Nuts upgrade, it's not necessary to visit the Forest Stage before becoming an adult anymore. (In the N64 version, you had to go there before playing the Song of Time for the first time.) 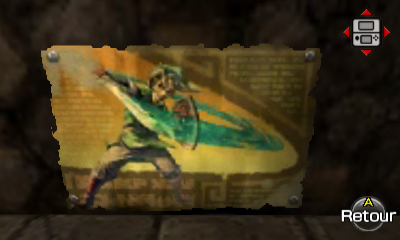 The Stone of Agony was replaced by the Shard of Agony and is now used without the Rumble Pak. When we get near a "secret", the shard appears on the screen and flashes.

The Sheikah stones look like a larger version of the Gossip Stones. Their aim is to give you advices when you are stuck.

There are two of them in Hyrule:
- In the Kokiri Forest, near Link's hut
- In the Temple of Time, on the wall to the left of the pedestal where the Spiritual Stones stand. 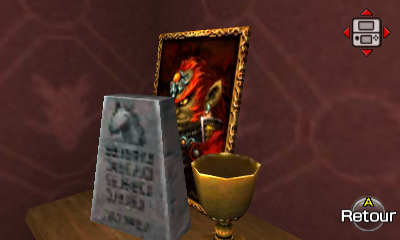 There's a wink to the Wii game of the series: Skyward Sword via a poster hidden behind two crates in the Gerudo Fortress!

In the Bombchu Shop, look on your left and surprise: another wink to Skyward Sword!

Another Skyward Sword reference is hidden in the Lon Lon Ranch's bedroom, next to the jars, but only with Adult Link. It seems there's a drawing of Malon at the same place when Link is a child?

And there is also a portrait of Ganondorf near the bed! 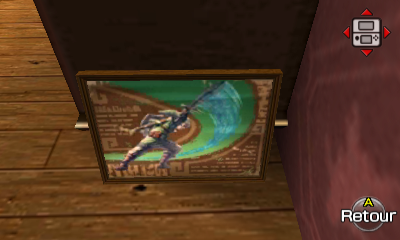 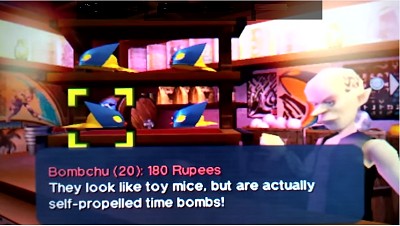 At the end of the game, the original end credits scroll down, as well as special credits for the 3DS with pictures from the journey. Then the "Master Quest" mode is unlocked.

In OOT 3D (and in MQ 3D), in Hyrule Castle's courtyard, the paintings of the characters from the Mario universe were replaced by a fresco depicting a Super Mario Bros level!

Small change to get a Piece of Heart at Zora's River

Link now has a baldric

In the 3DS version, the developers added a sword sheath. When you think of it, it seems quite logical and useful. 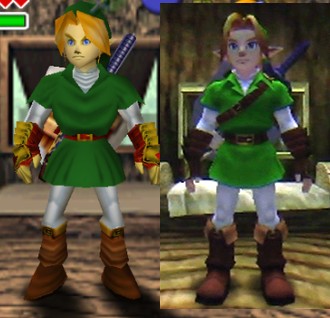 Thanks to everyone for your contribution!