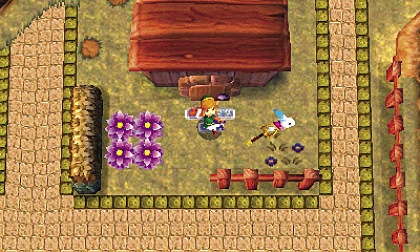 Having chosen the desert region as your next destination, return to Hyrule and pay another visit to your tenant. Ravio says that he got the Sand Rod back which is now available in his shop. Rent it or buy it, then go back to the other world and head to the southwest part of the Lorule field, to the far south of the Octoball ground. Enter the fissure, then merge into the wall and quickly go left. Open the chest containing 100 rupees, then merge again, move left, drop lower and enter the fissure. 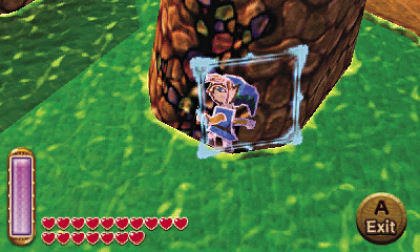 Hilda calls you and says that you are in a desert and that you will need an object allowing you to control the sand. Cross the water to the south, then climb the ladder to the north. Touch the weather vane to add it to the map, drop lower and unstick a maiamai from the wall. Enter the fissure to the northwest.

Head northwest and notice a fissure behind a rock. Use a bomb and just before it blows out, throw it on this rock to clear the fissure. Next, go southwest and climb the steps up. Use the Sand Rod and wave it to the right, then quickly, turn into a painting into the sand, go right and exit on the platform on the right. Climb the next steps up, merge into the wall and enter the fissure. 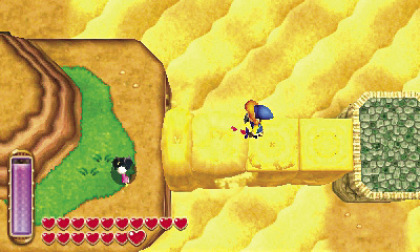 Drop down, pick up the Piece of Heart on the right, then jump and enter the fissure to the southeast again.

Go south, climb the steps up on the right, then the next ones. Wave the Sand Rod to the left and walk quickly on the sand wall to reach the left platform, and the next one. Merge into the wall and go left to enter the fissure. 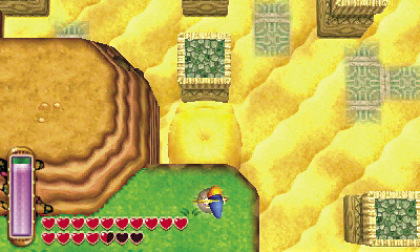 Cross the walkway to the south, then the next one and enter the fissure.