This dungeon can be visited in many ways, here is mine: 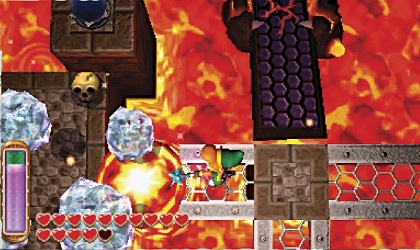 Use the Ice Rod several times to create a path on the lava, then quickly go north. Go right and take the path southeast. Get rid of the enemies thanks to the Ice Rod and bombs, which causes a chest to appear on the above level. Go back to the large room.

Stand on the seesaw on the left and use the Ice Rod to freeze the rock at the centre of the seesaw in order to fix it. Then walk to the other end, go north, turn left and use the rod on the lava geyser when it's up to reach the central platform. Next, quickly use the Ice Rod to activate the four crystal switches at the four corners of the platform. Open the chest which has just dropped and take the Compass. Go back right, go to the far right, merge into the wall, then go left, exit on the platform and pick up the Small Key! Merge again, and this time go to the far right to the southeast corner of the room, then take the path southeast. 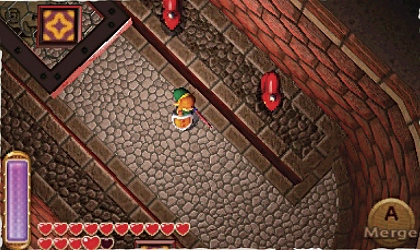 Step on the warp tile to get out in the northeast room.

If you wish: Step onto the next portal to get out in the room situated at the far northeast of the map. Use the Ice Rod on the lava to create a path to the north of the three lava geysers, then on the lava geyser on the right to merge into it and reach the other side of the room. Take the path to the outside. Fill your bottles with one or more small fairies, stock up on hearts, then go back inside and to the room with the two warp tiles side by side.

Drop below and step on the warp tile on the right to find yourself back in the room to the southeast of the map. Get rid of the enemies with the help of the Hookshot or Bow if you haven't done it before, then open the chest on the left which holds 50 rupees. Drop below and come back in the large room. 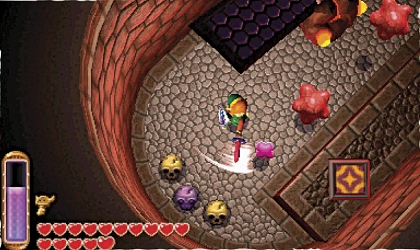 Stand on the seesaw again and go back on the central platform. Wave the Ice Rod on the left lava geyser, move quickly on the stone block, use the rod again, go on, use it again on the lava geyser and merge into it to reach the left wall. Merge into the wall, go left, then stand on the floor switch situated under the potion ingredients, which opens the door below. Jump and take the path southwest.

Get rid of the flying things thanks to the Ice Rod or avoid them, then step onto the seesaw to make it tilt. Step onto it again, freeze the rock, then move on and step on the warp tile to find yourself back in the room to the northwest of the map. 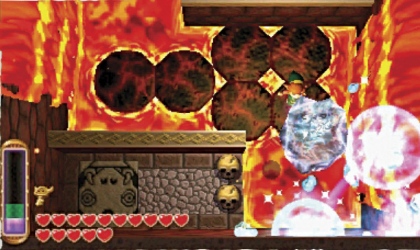 Step on the next tile to be back in the room at the far northwest on the map. Use the Ice Rod on the lava to create a path southward, then take the path to the outside. Grasp the Piece of Heart! Then come back inside, to the room with the two warp tiles side by side. Use the nearby tile again, then drop on the ledge on the right and walk on another warp tile to find yourself back in the previous room! Pick up the Small Key, then drop below and take the path towards southeast to return to the large room. 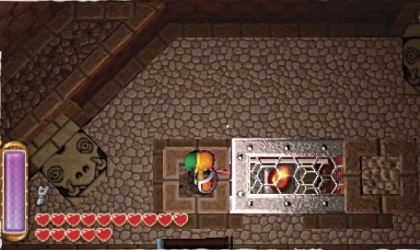 Step onto the seesaw on the right, freeze it, then go left and come back to the central platform. Wave the Ice Rod on the lava geyser on the left, move quickly on the stone block, use the rod again, go on, then go north, freeze the rock, then walk to the other end and jump towards the red rupee. Step on the floor switch on the right, which unseals the door above, to the north. Drop below, then go back on the seesaw on the right, freeze it, then go right. Turn into a painting, go left, exit on the ledge, then merge again into the wall on the left, go left, then take the path north.

Open the chest containing 50 rupees, then come back to the large room and drop below. Go near the lava, wave the rod to create a path towards the central platform, move on and get a silver rupee under this platform! Finally, take the path northward. Get rid of the wizard easily with the sword, then for the next two ones, use the Ice Rod several times. The access to the north is cleared, walk down the stairs to the... 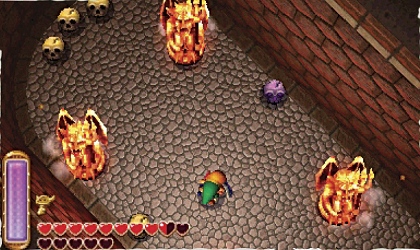 Cross the room southward. Go right and take the path. If you wish, get rid of the flying things using the Ice Rod, then wave the rod on the lava, walk on the lava block, then pick up the Small Key behind the beamos. Come back to the central room using the rod again. Move to the far left and go through the doorway.

The door closes and the gargoyles come alive and get on fire! Use the Ice Rod to freeze them and give them quickly one or two strikes with the sword to destroy them. Once defeated, the warp portal appears and the door opens. Go back to the central room.

Get rid of the three wizards thanks to the Ice Rod (and bombs), which causes three pieces of walkway to appear on the lava. Step onto the seesaw on the left, freeze it, walk to the other end, then use the rod on the two lava geysers to go near and get rid of the fourth wizard (which causes a fourth piece of walkway and a big chest to appear) but also to reach the wall on the left. Afterwards, merge into this wall and take right to the grid platform. When your energy gauge is full again, merge anew, walk to the next grid platform, drop below and take the path north. 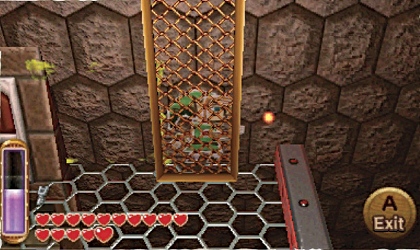 Merge into the wall on the right and exit behind the metal bridge to knock it down. Walk on this bridge, then drop on the left and open the big chest holding the Hylian Shield! Drop below towards north, step onto the seesaw on the left, freeze it, walk on the opposite seesaw, then unlock the door in the southwest corner of the room.

Use the Ice Rod on the lava, move on, protect yourself from the projectiles thanks to the Hylian Shield, then use the rod again to reach the back of the room. Smash the skulls, step on the switch, which creates a walkway in the large room, then go back to this room. 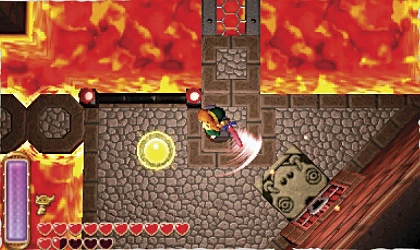 Take this new path, then stand on the tile on the right and strike the crystal switch. Take only a few steps, use the Ice Rod on the wizard, then quickly backtrack. Strike the switch another time to defeat this same wizard, which causes a piece of platform to appear. Come back quickly near the switch, strike it again, go quickly next to this piece of platform, wave the rod on the lava geyser, then merge to go right and reach this platform. The timing is difficult to get! Defeat the wizard, which makes a chest appear. Merge into the right wall and go left to reach the northeast corner. Merge into this wall again and exit behind the metal bridge to knock it down. Walk on this bridge and open the chest containing 100 rupees! Go back to the southeast corner of the room by going around it and unlock the door. 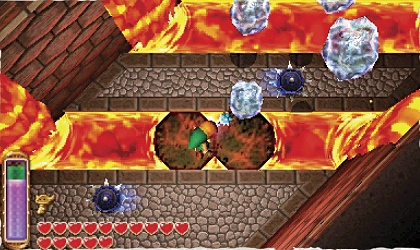 Beware the mobile spike traps, use the Ice Rod on the lava to reach the north side of the room, smash the skulls and step on the switch, which creates a walkway to the far south of the large room. Go back to this room.

Walk on this new path and go through the southern doorway. Use the Ice Rod on the lava to proceed south and use it again to activate the switch above, which causes two lifts to go up and down in the room. Next, step onto one of these lifts, merge into the wall and go north. Open the boss door...

Move on while avoiding the spiked rolling pins, then smash the skull to the north and step on the floor switch, which makes four wizards appear. Fight them with the rod or sword, then when they are all defeated, the central tile goes down. Drop through the hole... 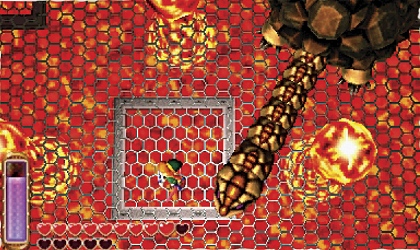 During the first phase the boss moves under the grid platform. Follow him and, when he passes beneath an opening in the platform, use the Ice Rod to hit his shell. Get away when lava geysers suddenly appear, then, after hitting him five times, the boss climbs on the platform and the second phase starts. You now have to strike his head with the sword. Go near to strike him a few times, then walk back to avoid being hit by his neck which expands. Also, be wary of his spinning attacks. After striking him about ten times (depending on the level of your sword), the boss is defeated! 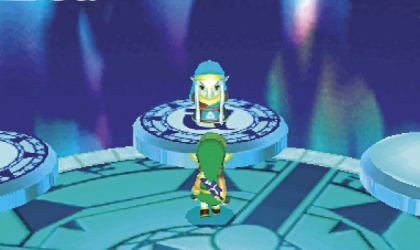 Take the Heart Container, then go north and touch the painting of the Sage. In the Sages' room, Impa admits that Zelda was right to believe in you and thanks you. She also says that the threat which lingers on Hyrule is the same as the one in the legend and that you have so much more to endure.

As you have gathered the Seven Sages, you are now worthy of getting the Triforce of Courage, which will allow you to defeat Yuga and stop the Demon King. The Sages join their powers to make the Triforce of Courage appear. Walk up the stairs, talk to the Sages if you wish, then grasp the Triforce! Then Impa tells you that you have to take the battle to Lorule Castle. Walk in the light to go out.