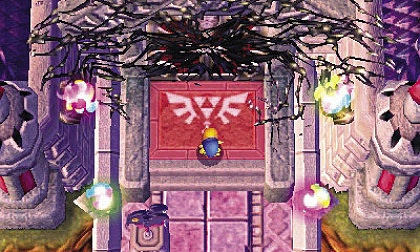 Before carrying on with the adventure, take advantage of this moment to find Pieces of Heart and maybe buy a red or blue potion. I strongly recommend owning the Master Sword Level 3. If necessary, go to Ravio's shop to buy the Hookshot and Bombs.

Next, go to Lorule Castle at the centre of the map, enter the courtyard and touch the weather vane to activate it. As you go near the entrance, Hilda appears and says that Yuga's minions have invaded the castle and that she's going to remove the barrier that protects it. Once the doors are opened, enter the castle. 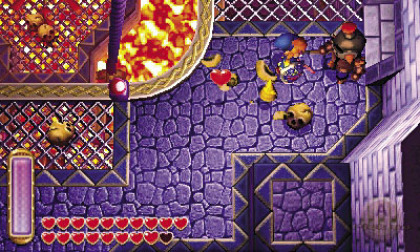 Avoid or fight the enemies, then climb the steps up on the left. Grab the right gargoyle and pull it or push it into the fire, then merge into the wall, go right and exit near the chest. Open it to get 20 additional rupees, then merge again, come back left and take the path north. Get rid of the ball and chain soldier by getting closer and striking him relentlessly. Next, walk up the stairs to the...

Take the path southward, then climb the steps up on the right and go to the far left. Merge into the wall, go right and exit near the chest which holds a monster horn. Come back right and take the path east. 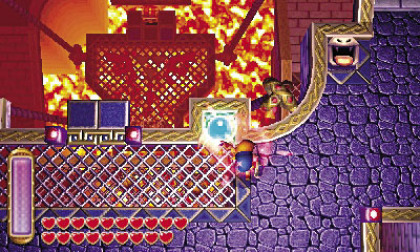 Fight the soldier, open the chest which contains 20 rupees, then put out the two braziers on the right using the sword, which reveals a path to the south. Take this path south and open another chest to get 100 rupees! Go back to the previous room and walk up the stairs south which take you to the...

Activate the crystal switch on the right which makes a warp portal appear, then grab one of the two gargoyles and pull it (or push it below). Go behind it and jump northward.

Open the chest to the north to find a Small Key! then go back to the... 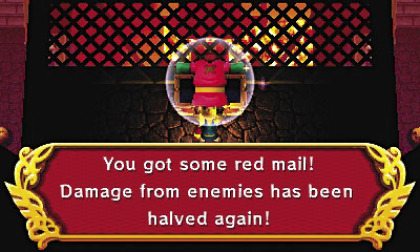 Go left and unlock the door hiding a staircase which leads to the...

Go right and open the chest which holds the Compass! Notice the big chest to the south, then put out the two nearby braziers, which causes two narrow paths to appear. Walk carefully on one of them, then open the big chest containing the Red Mail, which grants increased resistance to attacks!
(If you need fairies: merge into the wall south, go eastward (on the map), then once in the corner, exit to fall on a ledge on the second floor. Merge again, go westward until you reach a passage, then exit and go through to find a room with fairies.)

Cross back, light the two braziers, then go left and go downstairs back to the...

Now there are four rooms which can be explored in any order. Here is my choice: 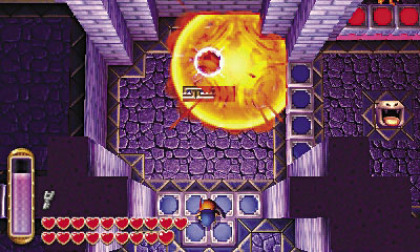 Climb the steps up on the left and stand on the pressure plate between the two "bomb pillars" to open the door. Defeat the enemy which may drop 50 rupees! then walk to the far north. Strike the crystal switch, place a bomb near this same switch, quickly go left, then continue south on the red lowered blocks. Use a bomb and throw it above the wall on the left to activate another switch. Go left, south, throw a bomb on the same switch and quickly stand on the blue lowered blocks to go up. Go south, throw a bomb towards the switch on the right, then hurry to the red lowered blocks on the left to go up! Go south and throw a bomb above the blocks on the right, near the Bomb Flower, which will blow the cracked rock up. 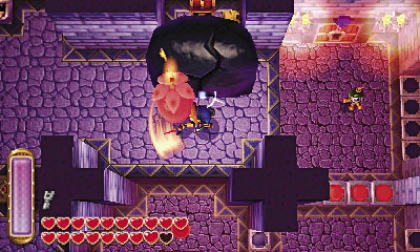 Another Moldorm! Drop below, then slash his tail with the sword until you get rid of him. You can recover a few hearts by merging into the south and north walls. (You can also remain near the entrance and throw bombs at him!) Step on the warp tile to come back to the...

... And see the square corresponding to the Moldorm room light up on the northern mural.